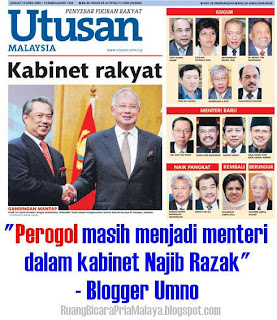 We are extremely concern about the alarming increases in number of such rape and physical abuses incidents happened in Malaysia. Two years ago, we failed to advocate for an Indonesian maid who was raped by a Minister from Kedah.

We wish to express our gratitude towards the concern of the Civil Society and bloggers community in Malaysia with regards to the recent Maid Raped by Malaysian senior minister.Baca lagi di sini.

This week, Rocky Bru, Sakmongkol and Another Brick in the Wall blogged about the alleged rape of an Indonesian maid by a Cabinet minister in 2007. The maid sent documents or some form of documentary evidence to the US embassy and other embassies. A non-governmental organization's press release on the rape can be accessed HERE.

Three years have passed and what is the outcome of investigations (if any)? Do check out Sakmongkol's post on this case. Has there been any rebuttal or denial? It has been three years and we know nothing as yet safe for what the aforementioned bloggers wrote in their respective sites.

Is there a disturbing trend?

A search on similar alleged cases revealed some interesting facts and figures. The FreeAnwar website HERE reported that Ustaz Taib Azzamuden Mohd Taib (now the Member of Parliament for Baling, Kedah and one-time Grand Imam of the National Mosque) revealed a "BIG SECRET" which was a list of names of Federal Ministers and Chief Ministers implicated in sexual misconduct. This disclosure was made in response to the challenge by Zam (Zainuddin Maidin), Muhammad Mohd Taib, Khalil Yaakob, and Muhyiddin Yassin to come clean and reveal what he knew.